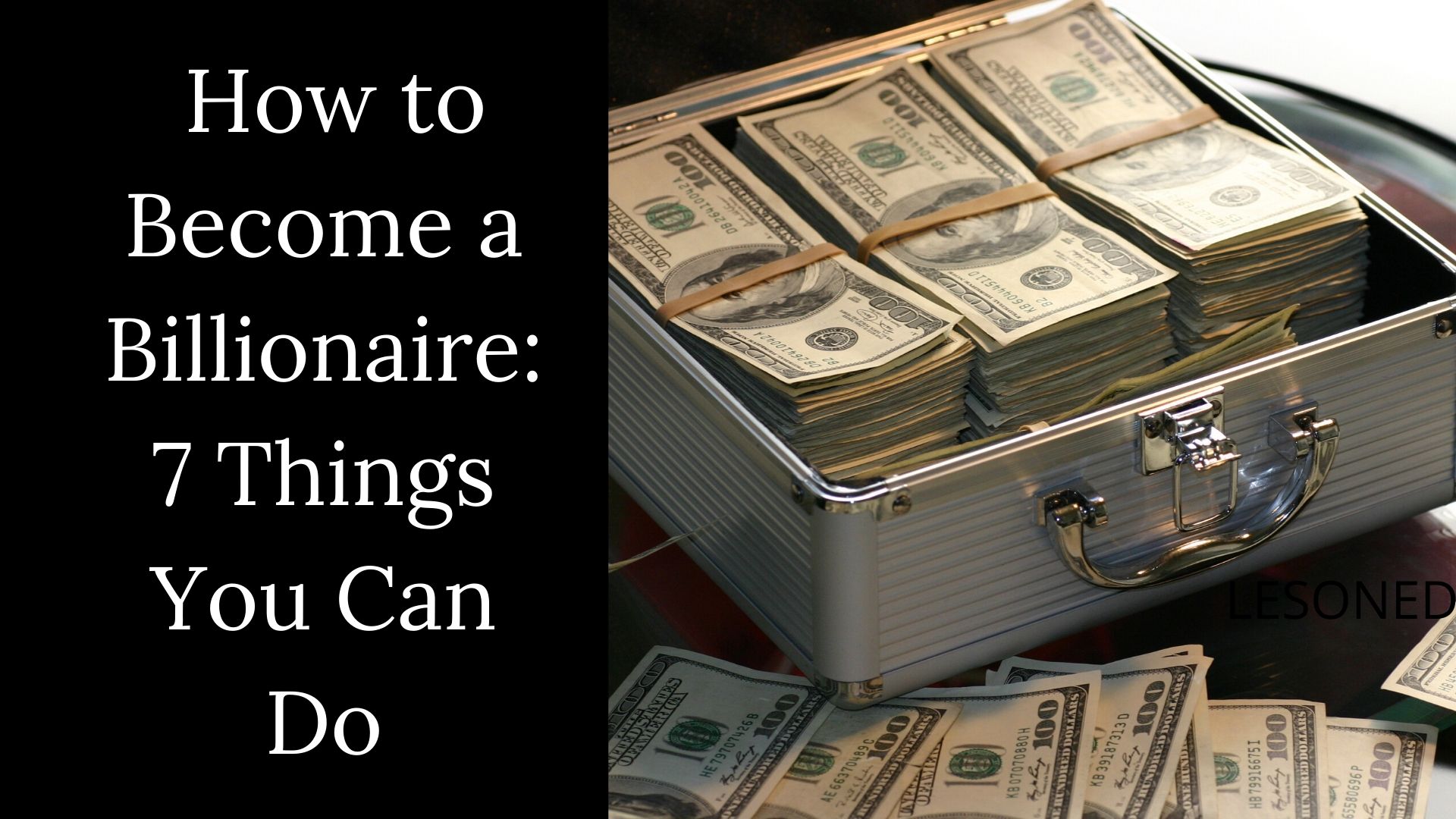 So you want to become a billionaire huh? Well if it was that easy maybe everyone would be a billionaire, and even still, life does not work like that;

So the bar was set that high. There were 2095 billionaires by March 2020 out of 8 billion people, but at least there are 46.8 million millionaires which shows its easier to become a millionaire

This article was was also written while prioritizing working smart other than working hard.

1. You should be blessed or at least lucky

This is the most important part of the success that no one has control over but you really need the odds to be in your favor. “Everything in life is luck” – Trump

There are lots of things we don’t control but they largely do influence our destiny. If you are cursed, well whatever you do will fail and if you are blessed, you will not need to try hard as everything will go in your favor

Here is how blessings or luck is important;

And even your country of birth could fuel your billionaire dream based on how you take advantage of your country’s economy. US and China top the billionaires’ list and they also top the world’s economies

Even though something beyond your control was included, there is something about it you can control;

For example “Opportunity comes to those who are prepared”. if you study engineering and a job vacancy about engineering presents its self, you will be able to cease it because you prepared yourself for it.

2. You should solve a problem

Well, you want to get rich. Solve the problem. Sounds easy, right? Well it’s not because you have to think and find a solution to a problem and thinking does not seem to be something people love doing but that’s it.

(some people create a problem and sell the solution i.e. create a disease and sell drug but I wouldn’t recommend making money that way)

Find a problem affecting people and find a solution to it. Then boom you will a billionaire because you will charge people to use your solution.

Jeff Bezos could become the first trillionaire. But that’s because he’s solving a problem. During the COVID-19 lockdown Amazon hard a lot of online orders because people needed supplies to use every day during the lockdown.

They were not allowed to move out of their homes unless buying something. This led to an increased demand for online orders which orders are actually paid for which actually made him richer than he already is.

Now this is also where luck comes as Jeff didn’t start the COVID-19, its a problem that worked in his favor since he had a solution

You can make money from providing people with what they want at a fee. This is the most direct and simple way to become a billionaire

If people want cars from Germany then you give them that. The fact that they could also be demanding or seeking for a particular product also means they have the money for it.

Even though I said this is easy, you still have to do some market research and take a very well calculated risk

You can also never go wrong when you meet people’s needs because the demand is always going up,

This is where Warren Buffet falls, dealing and investing in a wide range of products that people use every day like restaurants and food processing because people eat everyday, real estate as people shelter too

In the same aspect, if you provided quality services at a cheap price, people are very much likely to buy from you but if you keep making poor quality cheap products, in the long run, people will opt for the strong better and durable expensive products

4. Be the first and Monopolize

Apple and android where the first smartphone operating systems and they are running the duopoly alone.

This brings us to the next point

5. Innovate (Add something new to the table)

Since we have seen that most of the things have been created then you should add something new to the already existing products.

This again requires you to think as you will not improve any existing product without thinking.

So if there are already enough smart phone companies and enough car companies. When you make yours, your add something new to make people demand for it

For example, the first smartphones came out in 1994 for public purchase and phones have undergone modification until the 2007 Steve Jobs breakthrough to a new era

And by the way, most the things we are using today have been just modified over time from cars to airplanes, smartphones, name it and these are billion-dollar projects

During the press conference to announce NOKIA being acquired by Microsoft, The Nokia CEO ended his speech end saying ” we didn’t do anything wrong but how we lost”, Upon saying that all his management team, himself included teared sadly.

The this sums up some of the points here, either Nokia was unlucky, Nokia was affected by the duopoly of android and apple or Nokia failed to innovate something new to match competition or go with the forces of change or even failed to make users happy so they moved to products that matched their needs and demands

We all know how rich football stars, actors’ musicians and all celebrities are worth. Even though some do run bankrupt at times but well so do other rich people.

So you want to get rich. Well use your talent to make people happy and entertain them and they will pay to watch you

On the hand people work hard and relax to enjoy their hard-earned money by seeking all forms of entertainment like going to the beach, watching movies, or visiting different places which entertainment services they pay for

7. Create or Invent something new

This should be the first but decided to save the best for last. If you think its easy to invent or create something unique, Think of any anything and Google it. You will be surprised it already exists

All of the things we are using today that are man-made we all invented by someone. Even though some of these inventors or founders never get to see how they changed the world, some of them today have got to see the twilight of their inventions or creations

Well Zuckerberg has seen face book through the years

All those projects where created by thinking and not necessarily taught at school.

School gives you information that makes you knowledgeable but it does not give wisdom or intelligence to think.

It’s hard if not impossible to do all of those and you don’t end up a billionaire. You will also realize they all go hand in hand.

Having capital and and idea is all you need to get achieve your billionaire dream.